An equilateral triangle is a special case of isosceles triangles, in which all three sides of the triangle are equal: 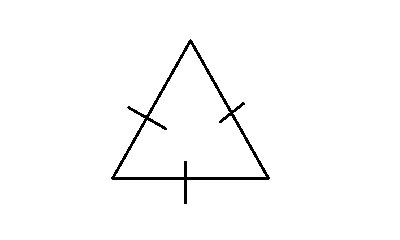 But since in this case, the third side is also the same, any side can serve as the base, and so we see that all angles must be the same.

--
Now that we've explained the basic concept of equilateral triangles in geometry, let's scroll down to work on specific geometry problems relating to this topic.

Welcome to Geometry Help! I'm Ido Sarig, a high-tech executive with a BSc degree in Computer Engineering and an MBA degree. Geometry doesn't have to be so hard! My goal is to help you develop a better way to approach and solve geometry problems. Learn more...