Two triangles are said to be 'similar' if their corresponding angles are all congruent. Which means they all have the same measure.

Think of it as "expanding" or "shrinking" a triangle by the same amount in all directions, keeping the proportions the same, but the sizes different: 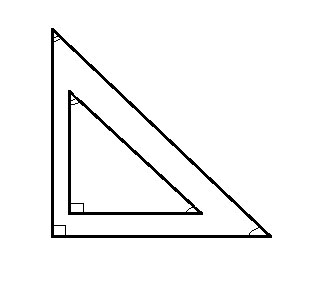 We denote similar  triangles using this symbol: ∼, for example:

A key property of similar triangles is that their sides are all proportional with the same ratio, called the "scale factor". So if ΔABC∼ ΔDEF, and side AB is twice as large as side DE, this same scale factor of 2:1 holds for all the other sides as well: BC = 2*EF, AC = 2*DF.

We can write this as AB/DE=BC/EF=AC/DF=scale factor. From this, we can derive other relationships, like the product of multiplying two sides:

The scale factor also holds true for the triangles' height and perimeter. The areas, which are (base*height/2) is the scale factor squared, since we are multiplying two parts (the base and the height) and each one of them is scaled by the same factor.

--
Now that we've explained the basic concept of similar triangles in geometry, let's scroll down to work on specific geometry problems relating to this topic.