The Pythagorean theorem, named after the Greek mathematician Pythagoras who first proved it, is fundamental to many geometry problems, and later on, for trigonometry.

The theorem states that in a right triangle, the square of the length of the hypotenuse is equal to the sum of the squares of the two legs: 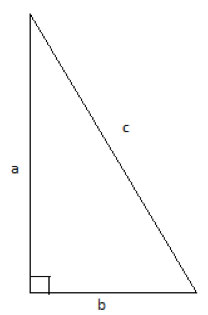 Pythagoras used proof by rearrangement to show that the relationship holds. He started out by creating 4 copies of the right triangle, and arranging them in a square, like so: 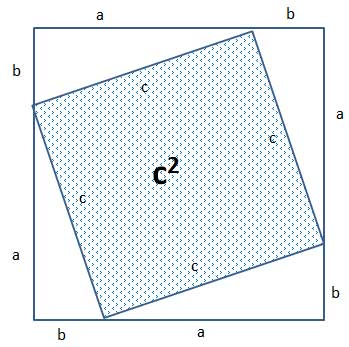 We know it is a square because it is a quadrangle, all its sides are equal since they are copies of the same hypotenuse, and the interior angle is 90°. 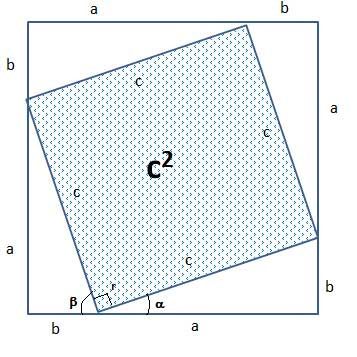 The interior angle, r, is 90° because the three angles α, β and r form a linear angle whose measure is 180°, while α+β =90° because they are the two non-right angles in the right triangle.

The edges of that square all measure c in length, so its area is c*c, or c squared. 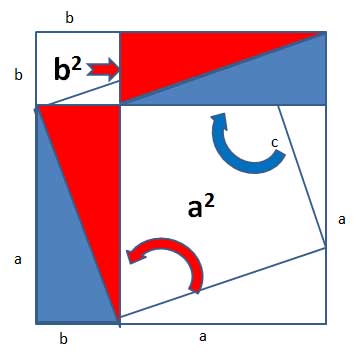 Since the outer square has not changed, and the triangles have not changed size or shape, only position, the new white area should be the same area as before,  c2.

So the previous white area, c2 , must be equal to this new white area, a2+b2, and the theorem is proven.

--
Now that we've explained the basic concept of the Pythagorean theorem in geometry, let's scroll down to work on specific geometry problems relating to this topic.